I Did It My Way 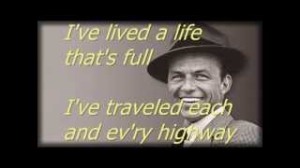 “I Did It My Way.” How many times have you heard or said that?

Whether it’s at home, on the job, or among friends , I’m sure we have all uttered those familiar words.  Sometimes, we really can do it, whatever it is, our way!

That’s the problem, we get use to doing things, competing and working things out, Our Way.  Frank Sinatra’s song was a great success because so many of us could related to it.

The post-modern era taught an entire generation that that was how you got ahead. You tackled the job, put your proverbial nose to the grine-stone and made it happen. You took pride in saying you were self-made. Isn’t that suppose to be the goal? Why do we attribute so much admiration to those who do it their way. We esteem them highly. History is replete with “self-made-men/women,” the Rockefeller’s, Kennedy’s, Mellows, the list goes on and on.

The self-made mentality too often leaves God out of the equation. What happens when there is an emergency or a crisis?  We lose our job, a home, or some family member gets sick, killed or is born with a life-threatening disease? These things seem to all come at the wrong time and we can’t fix them.  That’s when we do as Popeye does in those cartoons. We try pulling that proverbial can of spinach out, it’s called going to God when all else fails.

Our Christian walk looks like that too many times. We try  living our lives doing it all by ourselves. We make all the decisions. We are strangers to the Lord of the universe. How do I talk to Him now that an emergency has occurred? I get beat up because I feel like I can handle it and like Popeye, it’s only after I get really punched around by satan do I realize I’d better cry out to the Lord for help.

This week Pastor’s message pointed out this phenomena. He used the example of Popeye and Bluto. They were always fighting, and Popeye would get his head bashed-in. Popeye would eventually reach into his clothes and get that can of spinach out. Why didn’t Popeye just eat the spinach all the time? He did this over and over again. Regardless to his successes in whipping Bluto, Popeye went through life avoiding eating that spinach until he found himself in a jam.

Why do I wait until a spiritual battle happens before I called upon the Lord?

I remember when my youngest son was about 5 years old. He was born with a pigeon breast (a deformity of the chest).  He was susceptible to a fair amount of breathing problems as a kid. He stopped breathing one night and turned blue. I remember racing to the hospital and almost cursing God because I thought my son was going to die. I hadn’t been praying for my children and lifting them up to the Lord. I was too busy handling it myself, well, (doing it my way). Besides, the doctors said my son would out grow this condition. So, I trusted their diagnosis and I thought there was no need to worry.

I was basically saying to God, I got this! I’m the one going to work and paying the bills. I’m putting the food on the table and paying for their schooling. I had it all figured out. Besides, I’m the one taking them to the dentist, the doctors and paying for their piano lessons. I’m getting them ready for life. They’re all going to college and we’re doing a pretty good job of tracking their success. I’m doing it my way, I’ve got this.

On the way to the hospital, I realized that my son could be taken from me that very moment. I felt helpless, as I ran red-light after red-light. The Lord let me know that I had to depend upon Him. I felt bad because I had cursed Him. I wasn’t living by faith, I was just going through the motions. I had the form of a good strong Christian but I didn’t possess any power. I wasn’t the prayer warrior for my family. So, when my battles came (and they did) I cursed God.

Is this how your life looks today? Are you letting him direct your path or are you “Doing it Your Way?”

Lord Jesus, bless those reading this today. I pray that they will let go of the controls of their life.

I pray that they stop trying to do it their way, whatever it is, and that they begin to let You guide and direct them. Amen.

I'm a young senior, recently married, after raising 5 kids. I'm a christian and love to capture videos and tell stories with the camcorder. I love to skate and sing. I love to learn new things. I also love to garden and plant new kinds of veggies. I find it fascinating that people can communicate through blogging the word of God.